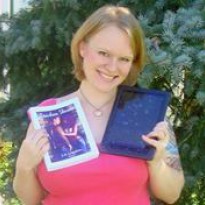 I wanted to provide my review for just the first seven of the series, because they are the best. The rest from book eight onward just slowly trickle downhill.

I was impressed with this series and it was one of the first that I got enveloped in with the characters and it's written in it's entirety as first person. From Sookie Stackhouse's POV. Which as a reader and an author I enjoy first person books more than I do third person. It's a personal preference.

This series does make you feel like Sookie is a hoochie at times because of her multiple sex partners with many supernatural folks. Many people choose a team as they do in most series. And I was on the Eric Northman band wagon from book one. I love that Vampire. In the books, as well as the TV show that is a poor adaptation of the books. But equally just as good.

I think the first Seven books of this series rate 5 in my book only because they are so vast and full of fun and mystery. They keep you on the edge of your seat and keep you begging for more.

I myself am a huge fan of Sookie as well as many other people in the series. So it's not just one person you become invested in, it's the whole lot of them.

Cons- Not enough sex. ( I like my books to be hotter.), Slowly starts to stumble downhill after book 8, and the final book of the series makes you want to lash out and cry at the same time. It's a terrible ending to a series.